All Collections
Troubleshooting
Is the app set up ok?

Is the app set up ok?

Here's how to ensure that you're setup ok.

From the launch of GoCarma v2.0 on May 21st 2021, the GoCarma app makes it easier for you to know if the app is setup ok.

Confirming You're Set Up Correctly

You can confirm that your GoCarma setup is ok simply by opening the app. At the top of the screen, you should see a blue bar with the words “Setup OK”.

If you do not, you may still need to update your app permissions. In this case, please follow the on-screen instructions to correct your setup. If you have any questions, just send us a message.

Soon after you complete a trip in a TEXpress Lane, it's a good idea to open the app to check that your trip was confirmed as HOV. If it's not, please allow some hours and check again as it can take some time to update. 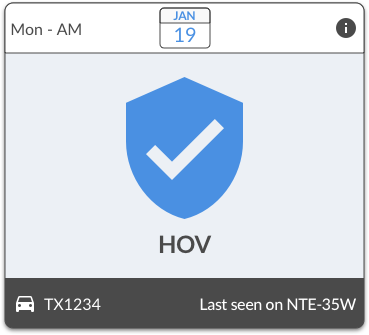 This HOV status means that GoCarma confirmed you traveled as a high-occupancy vehicle (at least 2 GoCarma users in the vehicle) during your most recent weekday peak period trip in a TEXpress Lane.

It does not necessarily mean you have received an HOV toll discount, as you may not have traveled as HOV at the time of every toll transaction during this period.

On the card, you will see the date and day the card is referring to, whether it's referring to an AM or PM peak period, and the TEXpress corridor you were most recently confirmed in. You may also see the license plate of the specific vehicle you traveled in.

The only way to confirm that you are receiving HOV toll discounts is to check your NTTA toll bill.

However, you can also see the reported vehicle occupancy for any vehicle you own in the Privacy -> Transactions screen.

If you see “2+” next to a toll transaction, this means that GoCarma verified that the vehicle was HOV at the time of the transaction.