Why GoCarma Requests That You Allow Bluetooth

If the GoCarma app is presenting you with the following card, it means that it is requesting your permission to access your iPhone's Bluetooth capability. 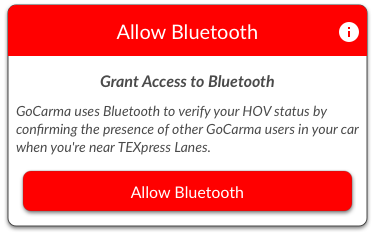 The app needs permission to access Bluetooth as it uses proximity to another GoCarma user to confirm your status as a high-occupancy vehicle (HOV).

Once at least 2 GoCarma users are confirmed in the vehicle, the vehicle is eligible for an HOV toll discounts for travel in TEXpress Lanes during weekday peak periods.

The app never attempts to use Bluetooth outside of weekday peak periods.